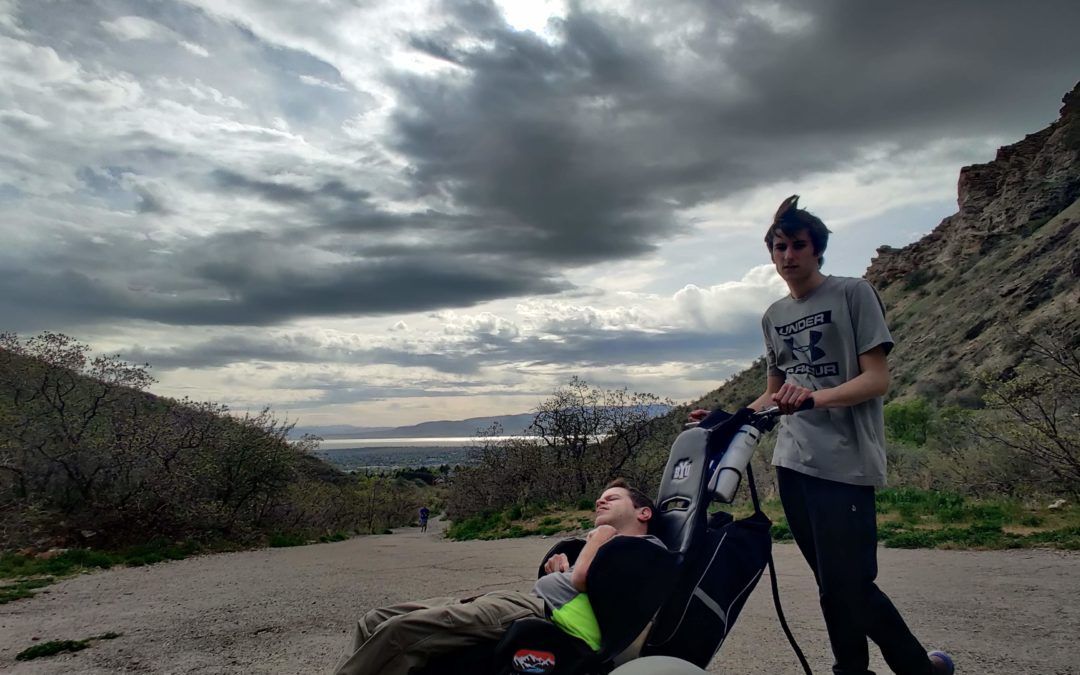 With the state of Utah beginning to ease “stay at home” restrictions Sam and I decided it was time for a proper wheelchair adventure. We had been forced to cancel several fun trips because of the pandemic.

We wanted something close by and a trail neither one of us had attempted before. The Squaw Peak trail isn’t too far from where we live, so we geared up and headed that way.

Mason is one of Sam’s caretakers, and also Sam’s cousin. He came a long to help push/pull Sam up the trail with me.

Squaw Peak Trail is a 7 mile hike, 3.5 up and 3.5 down. In that 3.5 miles up hikers will gain 2,739 feet of elevation. Hikers like me who have been locked in their houses for nearly 2 months and are a little soft around the middle should have probably chosen an easier hike to get back into the swing of things.

The Most Difficult Wheelchair Adventure we Have Attempted

Not only was Squaw Peak the most difficult trail we have attempted with the Emma X3 off road wheelchair, we also had the smallest group of people to help. With only Mason and I to move Sam up the trail we were moving slow, and wearing ourselves out quick. Before this our most difficult wheelchair adventure was the hike to Delicate Arch. 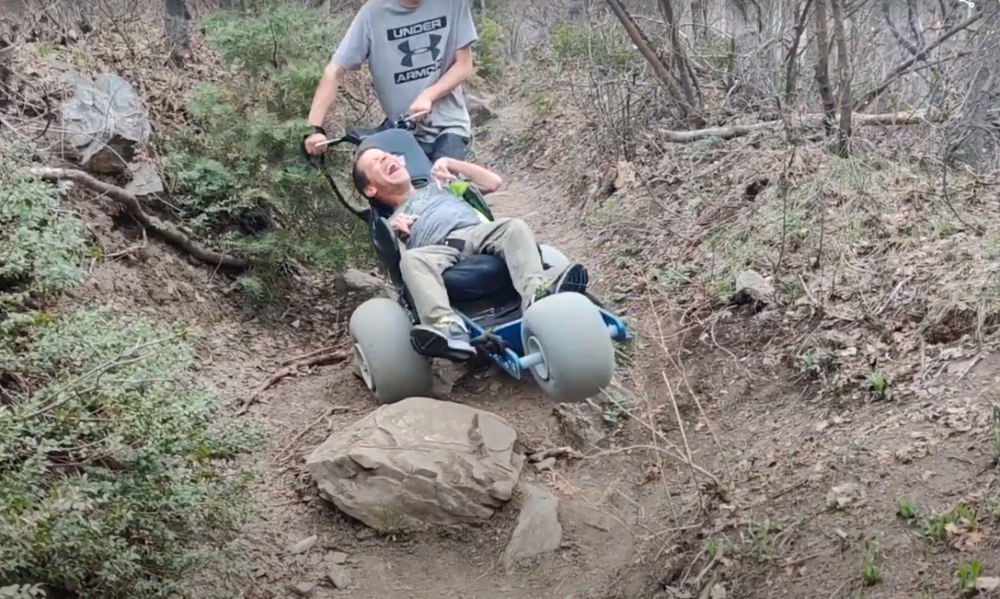 The trail eventually becomes steep single track and has technical sections where large boulders and roots fill the trail. These spots were so narrow we wouldn’t have been able to use the extra people even if we had them. Other than to spell each other out, the trail was just to narrow.

As I was pulling the wheelchair up the trail I would look back as Mason and I sent the tires full force into large jagged rocks over and over. The low pressure Wheeleez absorbed and molded themselves around and over everything we threw at it. And I was very impressed by how durable they are. I know they can get flats, but after this trip I don’t know what it takes to puncture one.

Once we made it to the difficult sections Mason and I were pushing with maximum effort. Because of this I needed to rest more often than Mason who is about 20 years younger than me.

So we would push, take a short break where I would attempt to catch my breath and then carry on again. A few other hikers passed us along the trail and were very much impressed to see a wheelchair so far up a difficult trail.

During one of my breaks Mason asked me, “Do you realize we’re taking breaks like every 15 seconds?” I couldn’t believe it. I felt as though I was pushing for at least 15 minutes between breaks!

Time to Face the Music

A couple that had passed us on the way up was now passing us on their way down. They gave us some candy and let us know we were still 1 mile from the top, but that in only half of a mile we would be able to see the valley below and get some cool pictures, and video.

We carried on for about 300 more feet when Mason let me know he had run out of water. I had a camel pack on but didn’t know how much was left. We were going so slow that if we kept at it we might have been walking down that trail in the dark making things much more difficult with the off road wheelchair. This was also our first big adventure of the season and both of us could feel blisters developing on our feet.

So we didn’t make it. We turned around and head back down the mountain. But we did get to have an adventure, gain another story to tell, and made a fun video.

I came away with the knowledge that the Emma X3 all terrain wheelchair is capable of going anywhere you are strong enough to push it. I have pushed this wheelchair more than just about anybody and attempting Squaw Peak trail I was really impressed at how it held up to everything we threw at it.

I also learned it’s time to start saying no to the cookies and ice cream so Sam and I can visit more cool places together.

PreviousThe Truth About Being in a Wheelchair
nextWheelchair Pheasant Hunting